A History of global crises & their effect on business 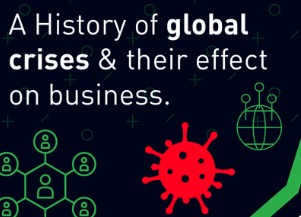 We are in the recovery phase of what is being labelled the worst global financial crisis since the Great Depression. COVID-19, and its spread across the planet, brought many economies to their knees. South Africa is one of these nations, having to accept loans from the IMF and other stakeholders to kick-start the post-lockdown economy. Leadership called for a new way of tackling socio-economic processes; an adaptation to the way things will be done in this new volatile age of spontaneous viral pandemics and other disruptive occurrences.

History has shown us that systems fail, and a society that depends on the system will ultimately follow suit. We need to be agile, and prepare for more possibilities than we previously thought necessary. Multiple global crises have, throughout history, affected people on both regional and global scales. In order to understand how the world bounces back, we should dig into previous crises of finance and government:

###The General Crisis Some crises originate from a force majeure that is completely out of humanity’s control, where all we can do is sit tight and do our best to ride out the storm. The General Crisis was not one of these. This global crisis originated in Western Europe, then rapidly started affecting the globe which was, at that time, growing in population and spread thanks to colonisation and sea trade.

The General Crisis is said to have occurred between the early 17th and 18th centuries (from 1718 to around 1840), and was characterised by a widespread breakdown of European politics, economics, and society as a cohesive unit. To make matters worse, this period of crisis in human history also included events like the English Civil War, the Fronde in France, revolts against the Spanish crown, and the crescendo of the Roman Empire’s Thirty Years’ War.

This period of history seems marred in pain and anguish, with more state breakdowns around the world during this time than any other period before of subsequently. Climatic events had their part to play in this crisis, and caused major crop failures in the marginal farmlands of Europe. A wave of urban migration followed, perpetuating already unstable urban populations, and in some areas caused Malthusian crises with agricultural deficits in relation to populations.

###Credit Crisis of 1772 This crisis was completely man-made, and involved a failing financial system that caused massive ripples across the planet. In fact, some historians believe that this crisis of 1772 actually sparked the Boston Tea Party and subsequent American Revolution. How did this catastrophe of global business actually happen? It involved one wealthy British man named Alexander Fordyce, and a number of large debts he couldn’t repay.

The 1772 Credit Crisis originated in London, spreading like a virus throughout Europe. By the mid-1760s the British Empire had gathered immeasurable wealth through colonial expansion and global trade. This led to an aura of optimism, which convinced many British banks that it was safe to expand credit rapidly in the country. All was going well until June 08, 1772, when Alexander Fordyce (a partner of the British banking house Neal, James, Fordyce, and Down) fled to France in order to escape paying back his massive loans.

The news of a major banking stakeholder being unable to repay his debts travelled to all corners of the British Empire, triggering panic in England. Creditors started queuing unsuccessfully to demand cash withdrawals, causing even more panic which soon spread to the Netherlands, Scotland, and the other British Colonies.

###Great Depression The Great Depression, some argue, had its origins in the Panic of 1866, which lead to a large international financial downturn. This crisis included the abandonment of banknote/precious metal exchanges in Italian banks (1866 to 1881), and sweeping economic reform in England.

Fifty years later and the world experienced the worst financial and economic crisis of the 20th century. A US Wall Street crash in 1929, accompanied by poor policy decisions in government corridors, caused a 10-year slump in income and employment rates – with output losses across most industrialised nations.

America was the hardest hit nation, suffering a massive unemployment spike and sending hundreds of thousands of people into a poverty, the likes of which the US hadn’t seen before. During this era, the term ‘breadline’ was coined. Thousands of unemployed men would line up, in the ‘breadline’, to receive a few chunks of rock-like bread to take home for their families.

###2008 Global Financial Crisis Remember 2007? South Africa was gearing up to host the 2010 Soccer World Cup, and the world was recovering from the catastrophic 2001 World Trade Centre attacks. Optimism for the future was at an all-time high, and things were looking up for the 2010s that were just around the corner.

Then came the 2008 Global Financial Crisis, triggering the Great Recession which was – until recently – considered the most-severe global financial crisis since the Great Depression. This crisis negatively affected financial markets across the globe, and resulted in the fall of the then-revered investment banking institution, Lehman Brothers. We felt the ripple effects in South Africa, especially from foreign investments and fuel prices.

The 2008 Global Financial Crisis was triggered by the imploding of the US housing bubble. Many high-profile financial institutions and businesses were brought to the edge of complete collapse, requiring unprecedented government-funded financial bail-out packages. This crisis wiped out millions of jobs globally, and trillions of Rands of income over the next 10 years.

###2020 Financial Crisis Taking the top spot from the 2008 Great Recession, in terms of worst financial crises since the Great Depression, is the current 2020 Financial Crisis. Some have labelled it the Great Lockdown, and it has battered the world in a way we’ve never seen before. For the first time since the Great Depression, both advanced economies and emerging/developing economies are in recession at the same time.

Nobody knows for sure when the COVID-19 virus will completely disappear, or if it ever will. What we do know is that, should the virus and its knock-on effects not be stemmed by 2021, things don’t look so good for the global economy. The IMF predicts that the cumulative output loss over 2020 and 2021 could be around 9 trillion US dollars, and that the real GDP growth year-on-year will be around -3,0 percent.

Yes, many businesses will not survive this crisis. Yes, many workers will be laid off and we can expect unemployment to rise. However, the IMF predicts that, should the pandemic fade by the start of 2021, and if policy actions taken globally are effective to prevent firm bankruptcies, we could see global growth rebound to 5.8 percent in 2021. If COVID-19 continues to haunt humanity into next year, the global GDP could fall to levels we’ve never experienced before.

###Looking ahead Our world is a resilient one. We are tested every so often, and we come back from catastrophe over and over, learning from our experiences along the way. Our elected leaders, charged with caring for our democratic states, are tested to the limits of their capabilities. They have done so before, and they will do so once again when the next global crisis arises. Until then, let us as industry professionals embrace this monumental challenge – and all those that come after it – with ingenuity, forethought, and a positive outlook.