Feeding the nation in times of crisis 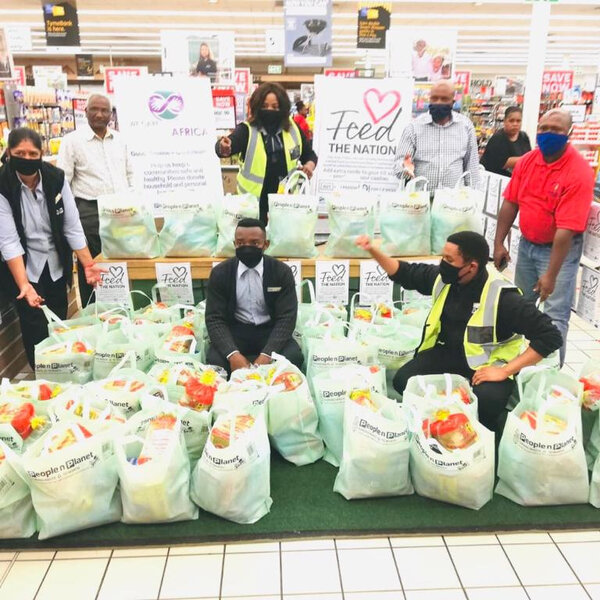 “What counts in life is not the mere fact that we have lived. It is what difference we have made in the lives of others that will determine the significance of the life we lead.” ~ Nelson Mandela

As government’s efforts to navigate COVID-19 and the subsequent nationwide lockdown continue, the hunger crisis in South Africa is increasing. Early indications suggest that 34% of South Africans have gone to bed hungry during the lockdown. There were millions of people living in poverty before the pandemic landed on our shores, and millions more now need food urgently. All indications are that this level of hunger is going to persist.

It has become clear quickly that hunger was the greatest threat to the well-being of South Africans during the COVID-19 lockdown. Moreover, there are tremendous difficulties in sourcing and getting food to the millions of South Africans in desperate need.

Our retailers and shopping centres have stepped up generously at this time of need, to provide for their communities where they can, working with established feeding schemes and charity networks.

Supermarkets and retail centres have joined communities across South Africa in their intensified efforts to fight hunger by donating millions of rands worth of food, supplying thousands of meals and taking hands with their customers to donate to the Solidarity Fund.

Supermarkets and stores step up their support

Since the start of the lockdown, the Shoprite Group has donated surplus food valued at more than R11 million to over 230 vetted NGOs, providing 3.7 million meals for the growing number of hungry South Africans.

The retailer has also partnered with its customers to raise more than R3.1 million via its in-store Act For Change Fund collection facility for the Solidarity Fund, including their initial donation of R1 million.

Customers who want to assist fellow citizens in need directly in a time where physical contact is severely restricted due to the lockdown, are also able to buy virtual vouchers, a quick and efficient alternative to food hampers.

Not forgetting their own staff and the impact COVID-19 has had on their safety and wellbeing, the group also allocated a R102 million one-off appreciation bonus for its shopfloor and distribution centre employees to thank and support them for their tireless efforts during the Covid-19 pandemic.

Pick n Pay has also launched their Feed the Nation campaign in an attempt to help the needy struggling to feed themselves. The relief fund aims to provide food and basic hygiene essentials during the lockdown period.

All cash donations are being distributed to Joint Aid Management (JAM) and FoodForward SA, with a focus on children and shelters. Collectively, they work with organisations throughout South Africa and feed more than 500 000 people daily. The Feed the Nation campaign is also supporting Afrika Tikkun as the main beneficiary.

The Feed the Nation campaign also encourages customers to make a R21 donation either online or at an in-store till point. This small donation can provide someone with a daily, nutritious meal for a week. In addition to the R21 donation, customers and companies can buy food hampers with pricing points ranging from R250 to R800. By the end of April, the campaign had helped to feed more than 1.2 million people.

Pick n Pay is also working with the Solidarity Fund by facilitating the significant allocation of funds and converting it into food hampers, collaborating with companies such as Coca Cola and Unitrans to assist with the delivery.

Taking their inspiration from the viral #EggChallenge doing the rounds on social media, Spar Group partnered with Good Things Guy Brent Lindeque to arrange food collections outside their stores. Rather than eat a raw egg, a mouthful of sugar and then drink a shot of brandy or rum to beat the boredom, the group are asking South Africans to donate a six-pack of eggs, 1 kilogram of maize and 1 litre of milk for those who need it most.

Woolworths has committed over R34 million to support a variety of initiatives to meet the challenges of the Covid-19 crisis in South Africa, including the protection and safety of their own staff. Additionally, they have made a R500 000 donation to Gift of the Givers for personal protective equipment for healthcare workers at mobile testing sites.

Locally-made masks to the value of R1 million will be donated for use in community relief interventions. A donation of t-shirts and caps was also made to community volunteer response teams so that volunteers on the frontline could be identified easily.

So far, more than 1 000 charities continue to access surplus food directly from Woolworths stores on an ongoing basis, and the retailer will make a R2 million contribution to improving food security during this crisis. This relief will come in the form of food packs for vulnerable communities and a donation of over 23 tonnes of porridge for emergency food relief to Gift of the Givers and Food ForwardSA.

McDonald’s South Africa announced it would donate 60 000 burgers to people most in need in the month of May. Working through their NGO partner, SA Harvest, which benefits a widespread network of charity organisations, McDonald’s will ensure that 2 000 burgers reach the most vulnerable in SA society every day.

Food Lover’s Market’s fourth annual Hunger Month in-store campaign coincided with the lockdown this May. It is aimed at encouraging consumers to contribute a meal to FoodForward SA by purchasing partner products in any Food Lover’s Market nationwide. The aim is to raise money in order to feed the vulnerable, but also bring awareness to the challenges of poor South Africans, who are vulnerable during the Covid-19 pandemic. Last year, the initiative raised more than R820 000 –which provided over 914 000 meals. This year, it has targeted supplying one million meals.

Restaurants open their hearts and kitchens to communities

Stellenbosch, known for its wonderful food and wine and home to some of South Africa’s best restaurants, is seeing its high-profile kitchens come together to fight hunger. With restaurants closed, chefs and kitchen crews have set up a soup kitchen that produces just over 20 000 portions of nutritious soup per week. They focus on local communities in the winelands region whose lives and livelihoods were decimated by the COVID-19 pandemic and lockdown.

In fact, chefs and restaurants across South Africa are opening their kitchens to feed disadvantaged communities with hot, nutritious meals daily during the lockdown. Thava Indian Restaurant in Norwood and Montecasino joined forces with Chef Philippe Frydman and converted the Norwood restaurant into a community kitchen. It started producing meals on April, 06 and has partnered with NGO Nosh Food Rescue, which distributes food to the needy at different locations, including Zandspruit.

Bellevue Café in Kloof, Durban, also pivoted and repurposed itself to cook much-needed meals for the needy – distributed by by NPO Zero2Five Trust. Six days a week, they cook at least 500kg of chicken stew in addition to rice, and distribute to marginalised communities all over KwaZulu-Natal. It is inspiring to know that it hasn’t had to pay for a single ingredient, with businesses and individuals donating ingredients generously. The Conscious Café in Hillcrest has joined the effort and also opened their kitchen to assist with preparing meals.

In addition, many restaurants have created crowd funding opportunities to ensure that their serving and kitchen staff can keep food on their tables during the lockdown. In one initiative, David Higgs, known for restaurants Marble and Saint in Johannesburg, celebrated chef and co-presenter of My Kitchen Rules South Africa, is selling copies of his recipe book in order to support the restaurants’ team of over 300 staff. All proceeds of each copy of Mile 8 (a book about cooking) go to the staff support trust.

Shopping malls and smaller regional centres have also stepped up to the plate, often in partnership with the national supermarket chains, to provide food and other forms of relief to their local communities and the people working on the frontline in their centres.

Malls and centres like Key West, Mark Park, Lakeside Mall and River Square have been running feeding schemes for cleaning and security staff, providing them with daily meals. In addition, both Key West and River Square packed and donated food hampers for the car guards who were unable to work during the initial lockdown period.

The Howard Centre in Cape Town is supporting the Greenlight Project in their bid to feed the hungry in the nearby Gardens Village community during the lockdown period. Their donation trolley, located near the Pick n Pay store in the centre, encourages customers to donate non-perishable food items, plastic containers, toiletries and sanitary items to be distributed among the Gardens Village community. The Greenlight Project has received over 1 500 grocery items and an additional 100 loaves of bread sponsored by Pick n Pay at the Howard Centre.

Morningside Shopping Centre is collaborating with Gift of the Givers and has food donation boxes for canned and non-perishable items to be distributed to impoverished communities in desperate need of aid. The centre’s Clicks has also sponsored over 200 health packs which Gift of the Givers distributed to the Ithlokomoleng Old Age Home in Alexandra.

It is also supporting the staff of their retailers who have been unable to earn a living during the lockdown. In partnership with Pick n Pay Outspan, the Morningside Shopping Centre co-owners Flanagan & Gerard and Grapnel Property Group are purchasing and distributing food parcels to all their restaurant waiters, waitresses, car washers and staff from the smaller SMMEs. A total of 221 families will be receiving these food parcels to assist them through these difficult times.

Mall of the North is helping its parking assistants during this challenging time by donating food parcels to each of the 50 team members. They have committed to provide this support until the mall is trading fully.

Hyprop’s Canal Walk, Cape Gate, Clearwater, Hyde Park Corner, Rosebank Mall, Sommerset Mall, The Glen and Woodlands, also partnered with Gift of Givers in a national in-centre food drive to distribute much needed non-perishable food items. It matched every full trolley donated by the public, with a full trolley of its own.

Vaal Mall launched a heartfelt in-centre donations drive, making it easy for anyone picking up essentials to donate non-perishable food, winter clothing, warm blankets and hygiene products to those in need. They teamed up with Vereeniging Lion’s Club to get these vital resources to those who need it most.

Ballito Junction partnered with its local SAPS, and together they are assisting surrounding impoverished communities with food parcels. Customers are encouraged to drop off non-perishable food items in the mall’s We Care Boxes and Ballito Junction has committed to match all collected items up to the value of R10 000.

Many other centres serve as a collection point for a multitude of feeding schemes and animal welfare centres, who have also been hard hit by the pandemic.