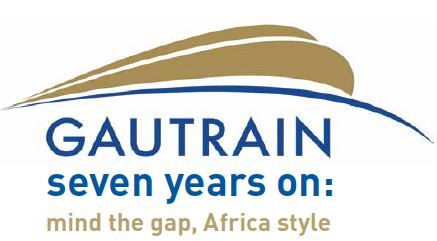 It seems incredible that the Gautrain opened seven years ago in June. The engineering marvel not only eased crushing traffic, but it also helped Johannesburg to partially fulfil its brand mandate to be a “world-class African city” (potholes and billing issues aside).

The Gautrain is Johannesburg’s metro, its subway, its underground – though, like New York and London, much of the system is above ground or even elevated, save for the 15 kilometres between the Marlboro portal and Park Station. What is particularly smart about the Gautrain is that it does not just serve Johannesburg. It extends into Ekurhuleni (for all intents and purposes part of Johannesburg, but separated for administrative purposes as Greater Johannesburg would be too large to administer as a single city). Of course it also serves Pretoria, hence its naming as the train of Gauteng. This was a particular stroke of genius, easing the traffic burden on the N1 between the two cities.

The Star reports that a metro system for Johannesburg was actually planned as far back as the 1960s. Urban legend has it that the ground under Johannesburg was too porous to handle the drilling and tunnelling, honeycombed with mine diggings as it was. But aside from one unfortunate sinkhole in Oxford Road, where the road collapsed during construction (nowhere near the old mining activity), Gautrain and Johannesburg have taken to each other like a duck to water.

Planning began in earnest in the early 2000s, and by 2006 Parliament gave the go-ahead for the estimated R26 billion price tag – R6 billion more than the initial cost of the Gauteng Freeway Improvement Project (GFIP), which began two years later in 2008. Rumblings and mutterings were heard around the country as non-Gauteng taxpayers were peeved that they should be saddled with the bill for a system they would never use. Credit must go to government, however, for their forward thinking and planning: if Gauteng was contributing a third of national GDP to the country (it still does), but the country’s economic engine was being clogged up by traffic congestion, then surely the country could put aside the budget to ensure that the engine was given an overhaul, for the benefit of all. As Alan Knott-Craig said at the SACSC’s Research Conference in May this year, “The only reason the Eastern Cape has roads is because Gauteng is part of South Africa.”

Like the GFIP, the Gautrain’s planning and construction took place before and apart from the FIFA Soccer World Cup in 2010 – although the coinciding times did much to bolster confidence in the country’s hosting of the event. Even so, no assurances were made that the system would be ready in time for the soccer spectacular. It took some sweet talking from national government to province (part owners of the Gautrain) – and some financial incentives – to try and have something up and running. The airport line between Sandton and OR Tambo was opened to the public on 8 June 2010 – just two days before the opening match at Soccer City. A nation brimmed with pride. The north-south commuter line between Hatfield and Rosebank opened just over a year later in August 2011, while the last leg between Rosebank and Park Station – delayed because of water leak issues in the tunnel – opened a year after that, in 2012. In the interim, buses ran commuters from Rosebank into town. But the project was finally done, and it was every bit the flagship that so many hoped it would be.

Credit has to go to the people behind the project, too many to mention here. These included, but are not limited to, Mbazima Shilowa, the then premier of Gauteng, who was so enrapt with the undertaking that it was dubbed the Shilowa Express; Jack van der Merwe, project manager for Gautrain, who has also been enlisted to build phase 2; and Dr Barbara Jensen, who was tasked with integrating the communications of the brand. With its witty out-of-home advertising (its latest billboard proclaims, “Quit smoking the M1”), consistent use of the navy blue and gold corporate colours on all collateral including trains and buses, and the generous application of its logo and slogan (“For people on the move” – a clever double entendre if ever there was one), Gautrain’s clear and compelling communications have made it distinctive and given it great brand awareness.

Arguably, Gautrain is unremarkable when compared to other systems around the world. It’s not the longest – that honour would belong to Shanghai, which has been on a building binge of note to match the growth of the Chinese economy. It’s not the oldest – that honour would belong to London, which opened its underground in 1883, three years before Johannesburg was even founded. It’s not the busiest – that honour would belong to Tokyo, whose professional ‘pushers’ shove people onto the train to pack ‘em in, before the doors close. It’s not the most opulent – that honour would go to Moscow, where chandeliers and artwork hang in the train stations. And it’s not the most famous – that honour undoubtedly goes to New York, whose subway system has had the starring role in many a movie set in the city. But there can be no doubt that Gautrain is world class. It’s clean, neat and tidy, a product of good planning and the Singapore-esque draconian application of the rules – no eating or drinking, no gum, no loud noise, no helmets, no bikes unless they are in bags, no rowdy behaviour, no vagrants and hawkers – the list goes on. For this reason, it was accused of being elitist, but the initial vision of an integrated transport system for all who can afford it, has become a reality with 32 million annual users.

From a social perspective, it’s interesting to see how users have adopted the ways of London: as a train disgorges its passengers at a station – Sandton in particular – commuters rapidly move up the escalators to exit. The slower ones keep left, the faster ones pass right. It’s the rule of the road, but one can’t help wondering if this interesting little slice of life came about because it naturally would, or because enough locals have been to London and learnt it there. And although the “train approaching, stand back from the platform edge” announcement in Gautrain stations is possibly less punchy than the “mind the gap” one in London, the Gautrain would be at home in any international city.

Moreover, Gautrain is revolutionary and forward-thinking, being one of the very few metro systems in Africa (the only other two are in Algiers and Cairo). It’s also the one area where Johannesburg pipped Sydney to the post – a stripe it can wear with confidence. Sydney’s metro system is currently under construction and will open in 2019. But Johannesburg probably needed it more – there are no navigable waterways on the Highveld, so like Los Angeles, the city is heavily dependent on the car. LA’s own metro system was built for the same reason – to address that.

Even though the car has been the saving grace of the shopping centre over the past 60 years, the train, it seems, has been especially beneficial to the centres that are directly on the route and have been affected by it: The Zone @ Rosebank, Sandton City, Centurion Mall and Hatfield Plaza. It has also indirectly benefited the centres that are on the bus route: Mall of Africa, Montecasino and Menlyn. An industry expert agrees that Sandton City has been a major benefactor of the system. “Sandton is an international brand, and it’s not uncommon for people to take the 15-minute ride from the airport to go and do some shopping in between flights.” The lack of direct connectivity between the actual station and the centre, though, is an unfortunate by-product of the planning, and the subsequent timing: the vision for the area atop the Sandtion station is an office development tentatively named Station Tower, while adjacent to it the 200,000m2 mixed-use Kgoro Central is being marketed currently. Such developments will create better direct links to Sandton City.

Additionally, Phase 2 planning for an extended Gautrain is already underway, and if the new vision is realised, the service will cover larger parts of Greater Johannesburg, including the East and West Rand, and bigger portions of Pretoria. Planned new stations with direct access include East Rand Mall and Fourways Mall, while centres that will benefit from bus services could include Greenstone, Cradlestone, Cosmo Mall, Jabulani Mall and Randburg Square.

The system has had a positive effect on developments near the stations, with a 200% increase in the price of sectional title flats over five years in the case of Rosebank – confirmed by the frenzy of building activity that is currently taking place there. Aside from Rosebank and Sandton, numerous other reports suggest that the biggest benefactors have been Braamfontein and Centurion. Over time, however, it is likely that most of the areas close by will draw benefit, and as it expands, there can be no doubt that the Gautrain rapid rail transport system, like SA’s shopping centres, will remain on par with the best in the world.