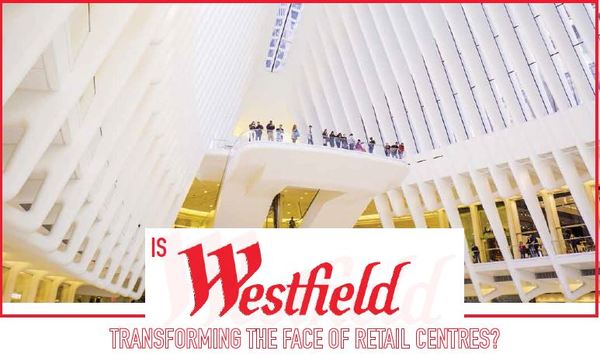 In 1957 in Blacktown, which was then little more than a dusty suburb on the outskirts of Sydney, a new shoe shop opened. Frank Lowy and John Saunders rented space above the shop to run a business buying land for housing, as the western suburbs of Sydney started to grow. The two men also ran a delicatessen opposite the railway station, but wanted to dabble in property.

On 2 July 1959, the men opened Westfield Shopping Centre, which was anchored by a Winns department store and just 12 line shops, with a landscaped courtyard and side parking. It was based on a concept imported from the United States, which, like in South Africa, proved highly successful in Australia. The men named the centre and their company based on the direction of their growth (west, into the western suburbs of Sydney) and the fields which they had begun purchasing to subdivide for housing. And so Westfield was born - a pioneering enterprise in the fields to the west of Sydney. Lowy admits that the idea was based more on instinct, and at the time he had no inclination that it would develop into the shopping centre giant it is today.

It seems that this pioneering spirit has been inculcated into the corporate ethos, and it very much lives on in contemporary times. Frank Lowy has since retired and his son Peter Lowy is now co-CEO of the company, which thrives on pioneering innovation. At the YPO Edge meeting in Vancouver, Lowy shared some of the future vision for Westfield. He acknowledged how much the retail landscape has changed, and will continue to change, and intimated that part of Westfield’s strategy will be to focus on creating a handful of stellar buildings that recognise the need for centres to be more than just shopping spaces, but that fully embrace their function as multi-functional venues. Lowy indicated that in the future, Westfield would focus on just a few centres that really met the criterion of extraordinary, and rumour has it that Westfield might opt to pare its 35 American centres down to just 15 of the very best. “Coming to the mall is entertainment… We are in the experience business,” he said. Lowy contextualised that although things had changed and are changing, they also hadn’t changed and are not likely to. “Everyone looks at the mall business as just a place to shop. But it’s never really been that way, and it isn’t that way today. It is a town centre, it is a place of commerce. But it is [also] a place of socialisation, and if it’s done right it can be the heart of the whole community.”

Charlie Mayfield, chairman of the John Lewis Partnership, concurs: “What Westfield does, better than anyone else, is create extraordinary destination centres in key locations.”

Lowy, like his father before him, has a vision for shopping that is different. It’s about that experience, not just the shopping, reiterating the old belief that the mall has become the old village square, with local flair and influence. The more local it is, the more customers like to come and feel at home there.

This has arguably been the success of the new Westfield World Trade Center in New York, built at the site of the new WTC complex and 9/11 Museum, and opened in August last year. Westfield has been lauded by tenants for helping to participate in a rebirth of lower Manhattan with the opening of the 33,900m2 shopping centre, which is the largest on the island. Says Jamie Nordstrom, president of Nordstrom, “Westfield does a good job of creating a platform for retailers to be successful. Our philosophies are aligned around how a customer defines a great experience today.” John Slavinsky, senior vicepresident at Louis Vuitton, agrees. “In terms of the relationship between Louis Vuitton and Westfield, both sides are laser-locked on what’s right for our client.”

Clearly then, two of Westfield’s key outcomes are experiences for shoppers, and excellent relationships with tenants. The third is technology, and together the three outcomes deliver a triple whammy of delight.

“There are a number of things that Westfield focus on, particularly around digital and using technology all throughout the customer shopping journey,” Nordstrom continues. It’s an important consideration, given the massive amount of retail space that is still being threatened by online platforms, which are believed to be partly responsible for the general decline in foot traffic. Westfield Labs, tasked with creating the mall of the future, has now been re-branded as Westfield Retail Solutions, and has been grappling with creating a seamless experience between the physical centres and its digital platform, but also consolidating its data and analytics, business development and information technology under the same department.

“Westfield is committed to helping physical retailers understand who their customer is before they walk into a store, what they are interested in buying, where they generally shop and where they have their packages sent, creating customer insights for the physical world previously only available in the digital world,” says Don Kingsborough, president of Westfield Retail Solutions. “I think Westfield’s in a powerful position today. Digital and physical retail: you free them up to shop like they’ve never shopped before.”

Not only is technology being used to help tenants better understand their customers, but it’s also being used to create unique entertainment experiences while also offering utility. For example, the robotics arm of Japanese telecom giant SoftBank announced a partnership that has brought the personal robot Pepper to Westfield. Pepper can say “hello” in six languages, take photos of customers using a built-in tablet, play games with patrons, play music, give shoppers the option to provide feedback on their shopping experience and offer directions around the mall. “In the current robotics landscape, C-3PO is still a way off – and may be for a long time,” says Mike Murphy of Quartz Magazine. “Right now, we have rolling eggs and animatronic selfie machines. But automation is likely to take away an increasing number of blue-collar jobs, and machines’ ability to discern what we ask of them is getting better every day. Today we can ask Pepper to tell us where Abercrombie & Fitch is, but soon we might be asking bots to find us another size of jeans, help us check-out, or even drive us to and from the mall.” And, back to the beginning: there’s the good old-fashioned entertainment side of things – though bigger and better at Westfield, and with technology never too far away. The company has thrown some major money at what it hails as the future of the shopping centre: the integrated space that goes beyond shopping.

Scott Sanders, creative head of global entertainment, puts it this way: “No other company besides Westfield is even attempting to do anything quite so dynamic as saying, ‘We’re going to turn our centres into real, genuine entertainment destinations and venues.’ Not only is it a new frontier, and not only is Westfield first, but I think it is the only shopping enterprise that’s really thinking about a full 360-degree experience for our customers that includes entertainment in a major way.”

Sanders should know. His company was bought by Westfield, and he is a Grammy-winning theatre producer. As a result, the approach is no-nonsense: John Legend was hired to launch the World Trade Center back in August last year. And the company took home three gold medals at the ICSC Maxi Awards, the global equivalent of the SACSC’s Footprints, this year. The three awards were for the grand opening/relaunch of Westfield World Trade Center, the Kylie Jenner “Kylie Cosmetics” pop-up at Westfield Topanga, and the best digital/social campaign for the Westfield Holiday Hub programme. The three key elements of the winning campaigns? The trinity: entertainment, technology, tenants.

A frequent Westfield shopper and social media influencer lauded the group for their innovation: “New restaurants and a real focus on wellbeing and health; there are ballet and yoga classes on offer, and a concierge service… it makes it easy to come with your family and to get everything done at the same time.”