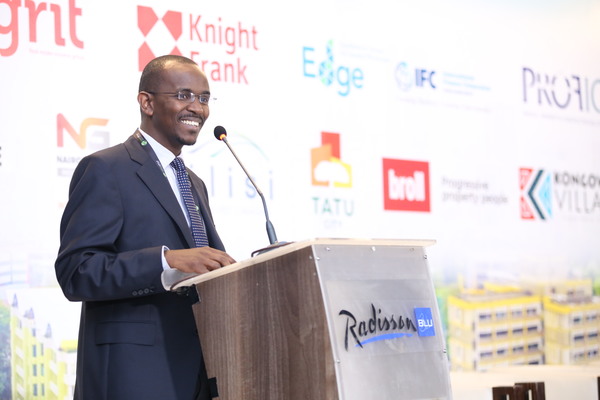 A multi-billion-dollar mixed-use urban development in Kenya’s capital Nairobi, dubbed Two Rivers, is rising from the ground. Already home to the largest shopping centre in the region (Two Rivers Mall), office towers and a hotel, it represents a breakout new master-planned property project and growth node in the East African nation’s largest city. ShoppingSA takes look at this exciting development that has strong South African links.

It still may be early days for the Two Rivers mega development, which is being rolled out on 102 acres (40ha) of land in a new decentralised node outside Nairobi’s traffic-jam-prone CBD. But, Two Rivers is already home to top landmarks and has secured major recognition.

The development houses the trendy 67,000m2 Two Rivers Mall, which is said to be the largest shopping centre in Sub-Saharan Africa, outside South Africa. The mall, which opened in February 2017 and takes up about 10% of the land parcel, currently has more than 200 stores, restaurants and entertainment attractions.

The latest attraction to open at Two Rivers Mall is what’s touted to be Africa’s biggest Ferris Wheel. Christened the Eye of Kenya, the new attraction in an outdoor theme-park area next to the mall, was opened by Kenyan President Uhuru Kenyatta in February this year.

Last year, the broader Two Rivers project was recognised as the top mixed-use development on the continent at the Africa Property Investment (API) Summit Awards, which took place in Sandton. The development is anchored by Two Rivers Mall, which has two office towers directly linked to it that have a total of 21,000m2 of A-grade office space. A 170-room hotel, by South African based and JSE-listed City Lodge Hotel Group, is also located next to the mall and a key component of the overall development.

Two Rivers Mall may be small by South African standards, but the fact that it is part of a much larger development and is home to major attractions and brands, makes it arguably one of the most exciting mixed-use developments in both Kenya and Sub-Saharan Africa.

According to its website, partners and investors in the project include China’s AVIC International Holding Corporation; and, the Industrial and Commercial Development Corporation (ICDC), which is an economic development organ of the Kenyan government. AVIC and the ICDC have injected US$75m, linked to the retail centre and infrastructure within the Two Rivers Development.

South African founded Old Mutual Properties is also involved, having invested US$63m for a 50% stake in the Two Rivers Mall, which it jointly owns with Two Rivers Development.

Speaking at API’s 2019 East Africa Property Investment Summit in Nairobi in April, Samuel Kariuki, Managing Director of Centum Real Estate, said: “Already some US$300m (R4.2 billion) has been invested in the Two Rivers Development. Besides Centum, which is the anchor investor and master developer of the project, Two Rivers has attracted investment from both South Africa and China.”

Kariuki added: “The Two Rivers Development is Centum’s flagship project and has been included as one of the catalytic developments as part of the government’s Kenya Vision 2030 initiative… We have a total of 102 acres available for development, with 1.5 million square metres of approved bulk rights that will be developed over the next few years and in the future.”

He noted that, thus far around 99,600m2 of bulk had been developed on site by three developers, including Two Rivers Lifestyle Centre (the developers and owners of Two Rivers Mall); together with investors in the City Lodge Hotel; and, the Victoria Bank development. Centum Real Estate’s headquarters as based at one of the office towers above the mall.

“The overall development will integrate retail; entertainment; lifestyle; A-grade offices; hotel and conferencing facilities; residential offerings; and, medical facilities… Construction ready plots are available for sale within the Two Rivers Development. While Centum Real Estate is the master developer and planner rolling out the project, we are open to co-investing in developments at Two Rivers as well as getting in private and other investors to do their own developments within the broader mixed-use development node,” he explained.

The Two Rivers Development is located within what’s referred to as the Diplomatic Blue Zone of Nairobi’s Gigiri district. This district is an upper market area of the Kenyan capital and is home to many of the city’s millionaires, foreign embassies and has a large expatriate population.

According to Centum, the Two Rivers precinct is also “on the right side of traffic” with infrastructure in place, while also having high-tech security. “Through its urban planning and property management initiatives, the Two Rivers Development has created an attractive, safe and well-managed environment with high levels of urban amenities, sustainable infrastructure and service delivery excellence.”

Major South African retail and food brands that have outlets at the mall include Woolworths, Mr Price, Spur and Galito’s. Well-known local Kenyan brands such as Chandarana Foodplus, Ashley Furniture and Art Café are also part of the tenant mix.

Responding to ShoppingSA queries, Michael Thiriku Karimi, speaking on behalf of Centum Real Estate and Two Rivers, said: “The mall has a well-diversified offering and quality tenants, which make up a healthy mix of local and international brands… Differentiated by design – Two Rivers employs best green building practices through having a naturally ventilated mall; open and large airspaces; a 1.4MW solar power plant; and, 85% of its water recycled.”

Two Rivers Mall also has a strong entertainment and leisure offering with several restaurants and a casino, in addition to its prominent Ferris Wheel and theme park attraction. The outdoor theme park is centered around a riverfront and water features, including a striking fountain that shoots water high up into the air.

However, with the regional shopping centre 80% let, he noted that more retail additions and new attractions are set to be introduced at Two Rivers Mall, including a cinema complex that is currently under construction.

Asked why Centum was undertaking the Two Rivers Mall and broader development, Karimi said the company’s mission is to create real tangible wealth by providing the channel through which investors access and build extraordinary enterprises in Africa. “These enterprises are centered around three strategic areas - Real Estate, Private Equity and Marketable Securities. Centum Real Estate, is the real estate arm of Centum with flagship developments such as Two Rivers, Vipingo and Pearl Marina.”

“Two Rivers is a best in class mixed-use development centered around a live, work, play philosophy. To achieve this, Centum focused on installation of world-class infrastructure, such as tarmacked dual carriage roads; a 23MVA substation with 7.5MWA back up power; the solar power plant; a fibre optic network; a two-million-liters-a-day water treatment facility; and, robust state-of-the-art security, which includes over 600 cameras and is supported by a security operations command centre,” he added.

With this infrastructure in place, Karimi explained: “Two Rivers Mall then naturally became the anchor development, as it embodied the desired office, retail, entertainment and lifestyle aspects for the development. This has since catalysed the opening up of the development to the public, by attracting millions of visitors; and, the growth trajectory of the overall development in bringing on board the other developments such as hospitality, offices, residential and commercial property projects.”

He said Centum was now focused on this area, adding other developments especially on the residential and commercial side. Two new apartment blocks are anticipated to break ground within the Two Rivers Development in the next two months, Riverbank (196 units) and Cascadia (450 units). It is part of the roll-out of the residential node, which is expected to have more than 2000 residential units.

The group was founded in 1967 as Industrial and Commercial Development Corporation Investment (ICDCI) and rebranded Centum Investment Company in 2008. Centum is listed on the Nairobi Stock Exchange as well as the Uganda Securities Exchange.

It has major projects and investments across Kenya and in Uganda. The group says its objective is to create investment-grade opportunities in eight key sectors, namely Real Estate and Infrastructure; Financial Services; Fast Moving Consumer Goods; Power; Agribusiness; Education; Healthcare; and, ICT.

Besides the Two Rivers Development, its Centum Real Estate division is leading the Vipingo Development, spread over 10,000 acres on the Kenyan coast, north of the port city of Mombasa; and, the 389-acre Pearl Marina lakefront development in Entebbe, Uganda. It also has a further pipeline of urban nodes in the wider Nairobi catchment area.

Both the Vipingo and Pearl Marina developments have retail elements planned, which is in-line with Centum Real Estate’s mission to master plan and invest in mixed-use developments.

“We are master developers of urban nodes in East Africa, transforming areas into places where people want to live, companies want to grow and neighbourhoods come alive,” Centum Real Estate declares in its company brochure.