Mall of Africa: a first birthday 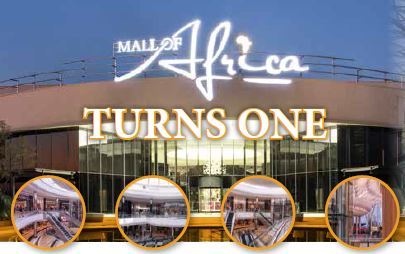 Super-mall, Mall of Africa, celebrated its first birthday on 28 April, and kicked off the celebrations with a press tour that engaged the five senses. Aptly dubbed “Safari of the Senses,” members of the press were treated to the sights, sounds, smells, tastes and touches of tenants Jo Malone, Starbucks, Lucky Bread and Sorbet Man, as well as information updates from Attacq staff and Woolworths, which opened its new-concept store at the centre last year.

The gathering was an opportunity for Attacq, 80% owners of the centre, to report back on the first year of trade. By all accounts, Mall of Africa has had a bumper Year One, exceeding expectations in terms of turnover and trading density. CEO of Attacq, Morné Wilken, said that the centre was one of the most valuable assets in the group’s property portfolio. “This mall is the realisation of a very significant vision and a long-term business journey. We identified a gap in the market to develop something extraordinary. We wanted to create something unique, a benchmark centre for Africa, hence the name.

The numbers paint a good picture: 123,000 visitors on opening day last year; 13.7 million visitors in the 11 months to end of March 2017, meaning an average of 1.2 million visitors a month, with 1.5 million in May last year (due to the novelty of the new centre) and 1.5 million in December; a turnover of R3.4 billion for the first 11 months, with an average of just over R300 million a month, swelling to almost R500 million in December; an average per month trading density of R2,630/m2, rising to R4,110/m2 in December; and an average spend per head of R249. Writing for City Press, Justin Brown reported in June last year that Mall of Africa was on target to achieve its first year projected turnover of R2.6 billion – a number it has convincingly superseded. The same article reported spokesperson for the centre, Marijke Arran, as noting that super-regional centres in South Africa had an average monthly trading density of R2,500/m2, while Mall of Africa’s was expected to be R2,000/m2, “based on the fact that we are a new mall and still have to establish trading patterns.” However, the centre has also beaten this figure by a significant margin.

Sandton City and Eastgate, the only two centres in Johannesburg that are bigger than Mall of Africa, pull between 1.5 and 2 million shoppers a month, higher than Mall of Africa, though the centre has displayed its considerable pulling power in that it draws over a million shoppers a month, the usual benchmark footfall figure for a super-regional centre. Wilken confirms, therefore, that the centre may choose to exercise its option to extend by 25,000m2, which it has the rights to do. It will remain one of the largest centres in Gauteng, but will still be shy of first prize as Menlyn Park and Fourways Mall run neck-and-neck to be the largest centre in the country.

Upon being asked whether Mall of Africa had managed to buck the trend of the new centre/ post-opening/two-year problem child phase, Head of Retail at Attacq, Michael Clampett, answered with a resounding YES. “Our vacancy rate is 0.8%, which translates into one store that is unlet, out of over 300. We have had very little tenant movement, which is encouraging. What we try to do is chat with tenants, and help them as quickly as possible when we see the numbers are not doing what they should be.” In response to a question about crime, Clampett put forward that Mall of Africa is a high-profile centre. “Because we are new and we are prominent, anything that happens makes the news. We do not believe that the centre is a crime hotspot – quite the contrary.”

The press were also informed that Bespoke Marketing replaces Purple Plumm as the marketing consultancy for the centre at the beginning of May, while Stone Consulting continues with the PR.

It seems as if the centre has managed to fly in the face of critics who deem South Africa, with the sixth-largest number of centres in the world, as ‘over-malled’. Tenants remain cautiously optimistic and positive.

The manager of one of the centre’s anchor tenants commented that the store has done very well. He reported that the store sees a number of shoppers who frequent the centre over the weekends but who also use their Sandton store during the week, indicating that they live in areas like Kyalami but work in Sandton, so they split their time between the Midrand and Sandton stores. He said that the Midrand store pulls bargain hunters over the weekend, who are looking for specials and discounted items. Comparing this to the group’s Hyde Park store, the manager said that the Hyde Park shopper is offended by sale items (which is why they do not have sales at the branch), believing this to indicate that she/ he cannot afford to pay full price, whereas the Midrand shopper is not ashamed to profess that a bargain is a good thing.

Although less relevant in an increasingly heterogeneous society, the manager shared details of the store’s cultural make-up. “Initially, we drew a lot of Black shoppers. And while we still see them regularly, there has been a marked increase in the number of White shoppers, and there has also been an increase in the number of Indian shoppers, given our proximity to Vorna Valley.” He added that in all groups there are both those who shop for expensive items and those who are looking for bargains.

One of the smaller line stores, housing a relatively new international brand for the local market, agrees with this assessment, stating that their Hyde Park branch does far and away the best in the group. Referring back to Mall of Africa, this store manager said that trading in the store is “okay,” but well below initial expectations. Even so, the London-based group is pleased with the local performance of stores.

The owner-manager of another store, which focuses on services for men and women, said she has had many a chat with centre management about the lack of foot traffic past her store. “We are doing trade,” she explained, “but the women’s store has to subsidise the men’s store. When the new PwC Tower brings 6,000 staff onto the site, and when Deloitte moves in, we will have the necessary foot traffic to make it work, because the entrance where we are located is linked to the office component. The men’s store needs office workers, so it will come in time. My store at Woodlands in Pretoria, which we bought as an existing store and did not open new, is flying – but it took four years with the previous owner. We are confident that it just needs time.”

Mall of Africa has done well in a very tough market but the question lingers: is this simply recycled income that has been redirected to a new centre that has all the trappings that older centres lack? And by comparison, then, how are the other centres’ figures looking?