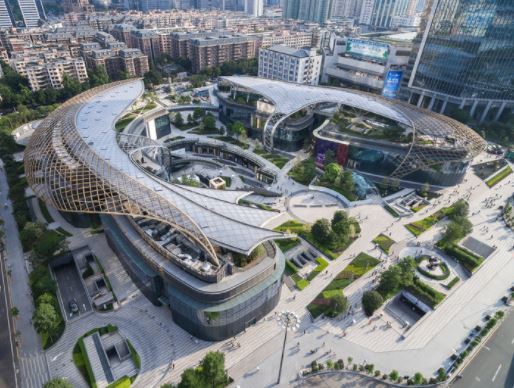 Set in the heart of the Guangzhou’s new Central Business District, Parc Central – which opened in late 2016 – has introduced a new typology to the burgeoning Pearl River Delta city; a ‘stadium for retail’ which uniquely blends the low-rise above and below-ground retail development within a multi-level parkland. Positioned along one of the city’s major thoroughfares, this development is a compelling addition to the cityscape of Guangzhou and combines retail, transitoriented and public realm design strategies.

Developed by Sun Hung Kai Properties and designed by international architecture firm Benoy, in collaboration with Ronald Lu and Partners, Parc Central has already been the recipient of several awards, and has attracted attention worldwide.

Developed on the site of a former square,the vision for Parc Central was to contribute socially and spatially to the city, as well as economically. Located along the city’s ‘green axis’, the vision for Parc Central was to form the focal point of this initiative and create a new ‘central park’ along the major Tianhe Road thoroughfare which dissects the city. The result is a distinctive 110,000m2 retail development which is designed around an open parkland environment. Forming the heart of the development, the landscape, with its varying levels and forms of greenery, has created a place to socialise, rest and relax; a ‘place to breathe’ within the city centre. Much of the development has been placed underground to achieve this and preserve the ground level environment.

The gardens, planted walkways and living walls create an undulating green space which integrates not only with the development itself, but the surrounding streetscape. Ultimately, the design offers a soothing and re-balanced environment to the Tianhe district.

With a green, undulatinglandscape, the scheme will introduce visitors to a new shopping, entertainment, dining and lifestyle concept. The vision is to create a destination where business and community mix together in an environment rich in character and distinct to Guangzhou.

The heart of the development is the partially covered, sunken garden which is surrounded by green walls and verdant walkways. The multi-level retail and dining podium has been developed to overlook and integrate with this landscaped area, making Parc Central a compelling addition to the cityscape of Guangzhou.

Parc Central is a low-rise building, standing 24m in height with two levels above ground and three levels underground. Being lower than the surrounding buildings, the design called for an eye-catching and powerful visual statement; one which would add to the rhythm of the city’s central axis.

Drawing on the symbol for peace, harmony and fortune in the Chinese culture, the architecture references the ‘Double fish’ in the form of a steel monocoque roof structure. The two buildings curve around the central gardens and are joined by a pedestrian bridge at one end. The monocoque roof canopies are supported by tree-like columns beneath which sit a series of gardens which extend the landscape element up the building.

Sustainably designed, Parc Central’s environmental performance is also enhanced through the addition of a rainwater collection system and low-E glass façades and an EFTE roof.

The interior design team also introduced the geometry of the architecture, with fluid ceiling cove forms and uninterrupted joinery along the void edges. Large atriums punctuate the retail journey and draw light into the arcades. A neutral colour palette of white and reconstituted stone creates a natural background for the mall, showcasing its tenants and their merchandise to maximum effect.

As a true transit-oriented development (TOD), the scheme also establishes a new public transport interchange for Guangzhou. Seamlessly connected above and below ground, Parc Central will be accessible via China’s metro system and bus network and is linked by overhead footbridges to the district’s neighbouring developments. The design enables the development to function as a multi-dimensional gathering space with convenient accessibility above, below and at ground level.

Parc Central has already won several awards since opening in late 2016. Earlier this year, it was presented the “ICSC China Shopping Centre Award” gold medal for New Developments. It won the “Asia Pacific Property Awards” – Retail Architecture China for advanced design concept, unique architectural style and thoughtful use of space. Organised by the International Property Media, the Asia Pacific Property Awards, often known as the Oscars for property development, are in their 26th year. Sun Hung Kai Properties (SHKP) believes that the award is a testament to its standing in the international property sector.

The mall also won the “Real Estate Design China Award”, which aims to select good architectural designs that make a positive contribution to the industry, city and society. The judges pointed out that Parc Central is on Guangzhou’s central axis and important green belt. They complimented it on its design for creating a spacious visual corridor and airy green space. The “Real Estate Design China Award” is given by DJSER.com, which is formed by a group of mainland real estate architects and the award has become influential in the mainland real estate industry in just three years. Parc Central’s bouncing double-fish design that gives the mall a lively modern image is particularly eye-catching on the busy Tianhe Road which has a strong commercial flavour. Street level shops have tall wide storefronts and double-glazed display windows. An open activity space runs through the interior, and a spiral design of the sunken gardens make the layering of different levels more prominent.

“Parc Central stands out from other commercial projects with its airy outdoor green space like a large shopping park that gives people a comfortable shopping environment and a pleasant visual experience. The interior is arched with special materials and ceiling patterns in white and apricot to give it a warm ambience, with a skylight letting in natural light. There is an array of internationally renowned brands, popular restaurants and a new LUXE cinema in Southern China. The comfortable environment and the provision a unique experience have rapidly made Parc Central a shopping paradise for Guangzhou citizens,” said a SHKP media release which announced the awards.

SHKP also received multiple honours at the International Council of Shopping Centres (ICSC) Asia Pacific Shopping Centre Awards in 2017. Parc Central won a gold award in the New Developments category for its futuristic, imaginative concept and landscaping. Judges of the competition were impressed by Parc Central’s unique design and extensive greenery, a testament to the success of its shopping-in-the-park concept. The mall showcases a perfect integration of people, architecture, the surroundings and nature, which epitomises sustainable development and makes Parc Central a leading business landmark in Guangzhou. Commenting on the award, Sun Hung Kai Real Estate Agency General Manager (Leasing) Henry Lam said: “Parc Central offers a host of international brands along with a variety of restaurants and leisure attractions. It also features a new LUXE cinema in Southern China, a duplex Starbucks coffee store, and an outlet of ABC Cooking Studio – a popular Japanese cuisine cooking studio which is new to Guangzhou. In addition to an experience centre of electric car maker Tesla, Parc Central will see Porsche’s first city-based exhibition hall in Asia by the end of 2017. The mall has introduced more than 120 renowned brands, some of which are newcomers to the city. We are proud that the comfortable environment and the provision of unique experience have rapidly made Parc Central a shopping paradise for Guangzhou citizens.”