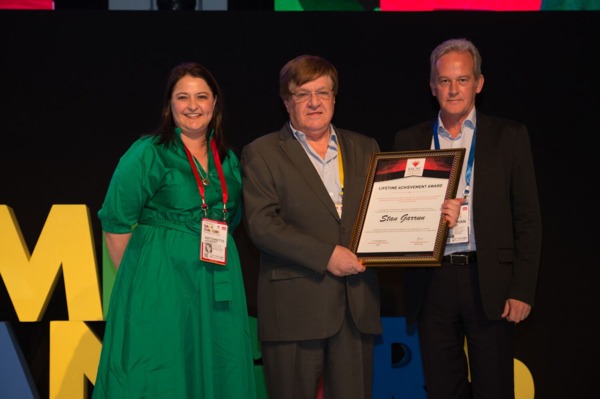 The SACSC has a number of prestigious awards which it gives out each year. Whilst these all acknowledge excellence in various aspects of retail and real estate, most of them go to teams who have worked together to achieve a result. The Lifetime Achievement Award and the Young Achiever Award, however, acknowledge individuals for their stellar efforts. The 2018 Lifetime Achievement Award was presented to Stan Garrun, who is probably best known in property circles for the work he did during his tenure at IPD South Africa (which later became MSCI South Africa). Shopping SA takes a look at how his career unfolded, and his particular contribution in retail real estate.

The Lifetime Achievement Award is given in special recognition for the contribution that an individual has made to the industry during the course of his or her career – and specifically, for building a legacy for the next generation. Stan is rather self-effacing about receiving this accolade, but does feel that is serves as recognition for the important role that the ‘numbers guys’ – the people who work with hard data – play in the industry. He does acknowledge that it was during his tenure as managing director of IPD that he and his team put together some very sophisticated research products for retail real estate specifically – some of which set a global standard.

Like many before him, Stan came to the commercial property industry in an indirect way. He spent the early years of his career in the media, working for what was then the Argus Group, and The Star Newspaper. His first contact with the built environment professions came when he worked for Group Five as the company’s in-house economist and market intelligence manager. His role there encompassed a variety of things including internal marketing services and research. He served on the Board of Group 5 Manufacturing as an Executive Director. “Construction was the place to be at the time,” he recalls, and Group Five was one of the industry heavyweights.

Having spent 15 years there, he was then approached by Brian Kirchmann, who at the time was CEO of SAPOA (the South African Property Owners Association) to join the association as its strategic services manager. This brought him into the world of commercial real estate and set him on an extremely interesting path. “South Africa’s property industry was really just starting to come into its own at the time – in the early 2000s – and there was not much available in the way of data or research for the industry,” he notes. Attempts had been made to get a vacancy survey up and running but they had faltered. One reason (although not the only reason) was that people were reluctant to share information.

“I created a forum which brought all the property brokers from the various organisations together, specifically for the purpose of gathering statistics,” he explains. At the time, it was a difficult task because of the reticence about sharing data, but his efforts succeeded and rejuvenated SAPOA Office Vacancy Survey (OVS) panels came to be. The SAPOA Brokers Forum emerged from these panels. “I managed to convince them to meet come and share their information – and eventually they began to realise that sharing was of benefit to them all,” he continues. Data was manually gathered by spreadsheet and used to create the vacancy figures that South Africa’s property industry has come to rely on. Stan was supported in his efforts by colleagues such as seasoned broker Joan Goldswain, who ran the Brokers Forum, and people with a strong ability for research and analytics like Kgaogelo Mamabolo, Jess Cleland and Niel Harmse who in turn led the OVS project (all three of whom worked for him at various times).

Later industrial and retail vacancy figures became available, and much more as the South African property industry grew and demand for quality research grew alongside it. The research service evolved into its own company and semi-independent body called SAPIX, which received equity funding from SAPOA and some nine large property owners in the industry at the time. Through international relationships forged to a large extent by industry veteran Ian Watt, the UK-based Investment Property Databank (IPD) became involved, ultimately purchasing the service and establishing IPD South Africa, with Garrun as its first managing director in 2003.

IPD South Africa then went from strength to strength, growing its information database tenfold, and providing an indispensable service to clients in the commercial real estate space, providing industry benchmarks and indexes that became the definitive measures of local market performance and gave investors key data to assist decision making. Clients received individual analysis of their portfolios. Some of the main product innovations instituted in Stan’s time at IPD were: detailed Operating Costs measurement, a Green Building Index, a Trading Density Index, and what is still the only extensive Retail Property Benchmarking Service in the world (the latter two clearly being of prime importance to the retail markets).

The annual IPD Conference was a highlight on the South African property calendar, arguably setting the agenda for much that subsequently occurred in real estate. The bi-annual announcement of the IPD Index (which looked at the performance results of the property sector) was always a premier information-based local event. A major aspect of Stan’s style was to make freely available to the investing and industry public, the crucial headline information about the property sector through media and events. This information kept stakeholders informed, helped invigorate the industry and served to market the IPD services as well.

The benefits to the South African real estate industry stretched further than giving local professionals a clearer picture of what was going on in the market. For the first time, having properly tracked figures for the industry allowed South Africa (SA) to take a place on the world real estate stage. “SA was growing as a property market when we began,” says Stan. “There was good institutional property investment in SA, but we needed innovation and growth in the industry, and that couldn’t happen as long as people continued to operate in silos and keep the rest of the world out of the loop.”

Stan continues: “One of IPD’s greatest contributions was that it brought necessary transparency to the market – thereby opening it up. Suddenly the world could see that SA had a property market worth looking at. Subsequently, a powerful listed property sector evolved in SA and although direct foreign property investment increased, it never shot the lights out. But overseas investors were now able to understand the risk quandary. And it was attractive listed property dynamics and indirect investment that took us further.”

As the property market grew, so did the number of research products and offerings developed by IPD SA and other researchers – including several for retail specifically. It is worth elaborating on the abovementioned retail benchmarking offering – an intricate product which provided detailed data on tenancies, product lines, consumer categories, trading densities, incomes and more. “Shopping centres,” he explains, “could compare themselves against the data but more importantly, they could also use it as the basis for feasibility studies and planning in the centres”. He adds: “Just to be clear, this was not demographic data. but specific property data, which was unprecedented. We could develop a world-class product because of the willingness of retail and property companies to invest their data (always aggregated and rendered anonymous) to develop insight. I do not think it a leap too far, to speculate that this assisted in part with the spectacular success of the retail sector over the years.”

Based on successes like this, IPD SA grew dramatically, having at times up to 75% coverage of the market (the remainder consisted of smaller operators which were unlikely to participate). The country’s large funds knew it was critical to understand the underlying property fundamentals. With the SA funds’ conversion to real estate investment trusts (REITs) later, the local property sector became well understood at fund level and at asset level, and was then on par with the rest of the world. While Stan says he can’t claim to have had much to do with putting SA property on the global map, his efforts to make quality information available undoubtedly helped.

Things have changed for Stan Garrun and for IPD in recent years. IPD globally was acquired by MSCI, including the South African business, and after staying on for three years under the MSCI banner, he decided it was time for something new. He spent some time at the University of Cape Town in the Urban Real Estate Research Unit, and in his latest move, he has established Open Window Analytics – a company which will also be focused on providing real estate research and analysis, filling some of the gaps which have opened in the market following MSCI’s acquisition of IPD. Whilst the details are perhaps the subject of another interview, suffice it to say that he is still as committed as ever to creating high-quality data for the SA property market – and ultimately, for receptive markets in the rest of Africa, too.

“There is a dearth of good quality property information in Africa, and nobody has really pushed themselves to address that information deficit,” he comments. Whilst his work is about creating hard data, Stan’s motives are also partly altruistic. “I would like to believe that we can start to have an impact on transparency in Africa, by supplying information to unravel the exciting developing Property markets on this continent,” he says. It is not only for the tremendously valuable service he helped deliver for the property industry that he deserves acknowledgement – it is also for his ability to hold a bigger vision for the greater good in mind, whilst executing the details of the plan.