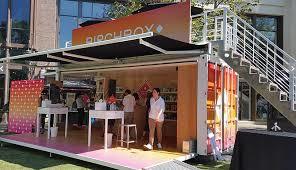 In the past, pop-up stores were frequently about taking advantage of seasonal trends such as Halloween or Christmas. Product quality tended to be poor, the stores lacked appeal and, as a result, were often thought of as undesirable by shopping centre landlords.

But the pop-up has evolved. They’re now regarded as more interesting and desirable because they are often incubator spaces for launching businesses, for established businesses experimenting with new ideas, or for foreign brands venturing cautiously into new markets. They also offer shopping centre managers something new and different, and can help drive foot traffic and enthuse jaded shoppers.

From being a strategy for attracting seasonal tenants and shoppers to malls, pop-ups have become an increasingly active and diverse business practice, observes Melina Cordero, former Global Head of Retail Research at international commercial real estate services firm CBRE. “Now the shift is to temporary tenants. The landlord is thinking, ‘I can leverage the pop up to create buzz and interest’,” she says.

This trend will escalate as global retailers wait to see how traditional brick-and-mortar retailing evolves in the digital age. “We have heard tenants say that they are unsure of their future – we hear the hesitancy in their voices. They don’t want that risk of being locked into a lease,” says Holly Rome, Executive Vice President for National Leasing at real estate advisory firm JLL.

In markets such as North America and Europe, where shopping centres are under pressure as tenants either close stores or reduce their floor space, pop-ups are a useful source of revenue and a way to fill otherwise underutilised areas. They also give centre managers more flexibility at a time when quick responses to fast-changing retail tastes are critical.

Arielle Crane, Global Communications Manager at Storefront, which claims to be the world’s largest marketplace for short-term retail, thinks that pop-ups will help malls appeal more to experience-minded consumers, most notably millennials. This group’s focus on online shopping tends to reduce their mall visits. Crane points to the ROTH Capital Partners 2017-2018 Millennial Survey, which found that 71% of millennials believe a significantly enhanced retail experience would increase their in-store visits and purchases.

Pop-ups going mainstream Some malls have now made pop-ups a permanent part of their mainstream shopping strategy. Westfield Century City in Los Angeles created a permanent pop-up venue following a highly successful experiment at a sister mall, which saw 20 000 shoppers visit a Kylie Cosmetics (founded by reality TV personality Kylie Jenner) pop-up concept. Storefront Magazine reports that brands such as luxury goods manufacturer Hermes have since used the Century City pop-up space to “test new concepts and brand opportunities; a win-win and promising relationship for both the mall owner and brand”.

The permanent pop-up spaces being created at US malls mean that management are able to offer much shorter leases – ranging from month-to-month to six months – and can target small independent and organic retailers actively, says Todd Caruso, Senior Managing Director for Retail Services in the Americas at CBRE. “The concept of incubation is going to be far more prevalent in the next couple of years,” he observes. Caruso adds that, to fit into incubator spaces, some major national retailers are unveiling satellite concepts that have an ‘indie’ (independent thinking) feel.

Eric Goldschein of Fundera, a marketplace for small business financial solutions, notes that pop-ups can be used to test virtually anything – from a revamped marketing strategy to a new product or a potential new store location – in a low-stakes setting.

“The most obvious reason to try a pop-up store before opening a permanent location is you can see for yourself whether investing in the latter would be worth it,” he says. “With a pop-up, you might find that your in-person sales don’t match what you do online. Or you might find that people in this community love your products and will support you if you set up shop full time. But you won’t know until you try!”

He adds that brands can supercharge their holiday sales by using a pop-up to take advantage of people’s love for window shopping and impulse buys in the lead-up to Christmas, or over long weekends throughout the year.

In South Africa, brands such as Magnum ice cream, Cadbury, Nintendo Switch and Bub Hub & Company baby store use pop-ups to good effect. The Zone @ Rosebank, one of Johannesburg’s prominent shopping and lifestyle developments, won an International Council of Shopping Centres gold marketing award in 2015 for its hosting of a Magnum pop-up. The awards honour retail marketing excellence in Europe and Africa.

Unilever developed the experiential pop-up concept to celebrate the 25th birthday of the luxury Magnum brand. The store invited consumers to visit a beautifully designed pop-up store and create their own favourite Magnum ice-cream by choosing from different dippings and toppings.

In total, more than 48 500 ice creams were sold during the eight-week period and more than R20-million worth of exposure was solicited across a broad range of media.

In London, the door-to-door flower delivery service, Freddie’s Flowers, will sometimes host several pop-ups simultaneously in various parts of the city as a way to connect with customers who are from different socio-economic groups and therefore have different attitudes and shopping needs when it comes to flowers.

Pop-ups are also useful for getting rid of unsold stock, particularly for upmarket retailers that may not want to taint the image of their permanent stores with ‘tacky’ discount strategies.

“Unsold inventory can burn a hole in your pocket. It’s costly to keep on warehouse shelves and it will continue to lose value as it gets older and older,” observes Goldschein. “Your pop-up shop might be the perfect venue for taking that old inventory out for a spin and giving it new life. Present it at a discount and recoup what you can from its sales, rather than resigning yourself to taking a loss on it altogether.”

From online to pop-up Goldschein suggests that even small online retailers will benefit from a pop-up presence as existing customers can meet the otherwise ‘invisible’ founders and staff, as well as touch and feel the products that they may only see online. It can also build trust with a new clientele that typically lacks the confidence to buy online.

Certainly, there are big global online retailers who see the value in pop-ups. Perhaps this, more than anything else, emphasises how the pop-up concept has truly gone mainstream.

Amazon, the flag-bearer for online shopping, operated almost 90 pop-ups in the US for several years, before closing them in April 2019 as part of a refocused retail strategy that will see it opening more Amazon Books stores, for example. But this doesn’t mean that Amazon no longer has faith in the pop-up concept. In June 2019, it announced it would be opening 10 pop-up stores in the UK to sell everything from food and drink to electronics, beauty products and homewares.

Goop, the American natural health company owned by actress Gwyneth Paltrow, is primarily focused on online sales. Yet it embraced pop-up stores successfully as a way to fulfil “our ultimate dream: a permanent brick-and-mortar shop to call our own”.

Concludes Arielle Crane of Storefront: “Pop-up stores began as a trend, became a strategy for some, and now their constant evolution and ubiquitous presence from urban shopping meccas to suburban malls – and in locations and formats well beyond traditional storefronts – has proved they’re here to stay.”