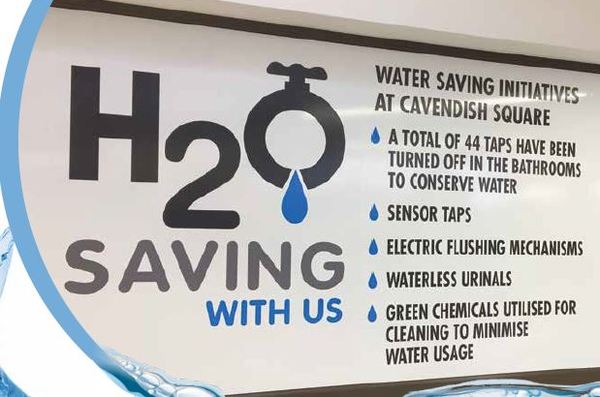 The serious scale of the drought being faced by the major city of Cape Town – and numerous other parts of South Africa - has galvanised many around the country to relook the way they think about water. Dr Anthony Turton, a foremost water resource management expert, warns that we can no longer think about water as a stock, but as a flux. Turton addressed a Water Symposium in February in Johannesburg. The symposium was jointly organised by the South African Jewish Board of Deputies and the Wandile Zulu Foundation. Speaking at the symposium, Turton said, “Water is not a stock. Water is a flux. A flux moves in time and space. Water is not a finite resource, it is an infinitely renewable resource. We actually do not have a water problem. We have a pollution problem, a salt problem, or a problem about water at the wrong time, the wrong place, too far, too dirty – that is the problem. So we must re-frame the problem…”

Whilst the reframing of the problem is being battled with on a national and provincial level, malls in Cape Town have had to come to terms with harsh water restrictions and the impending reality of Day Zero when taps in the city could be turned off.

Cleanliness and hygiene are foremost in the minds of many mall managements, as is the challenge of helping tenants such as food businesses, hair salons and beauty bars who rely on water, to continue trading. Customers also need to know that should they need to use the toilets or change a baby’s nappy, conditions will be comfortable and meet hygiene standards. The implications of dry taps are immense.

“We are implementing certain measures to address the airconditioning and ablution usages at the mall,” says Blom. “However, in order to reach the required 45% saving on tenant consumption levels, we are going to have to work together as a collective, if we wish to avoid the repercussions of Day Zero. A few tenants have implemented strategies which have worked very well for them – these tenants include Woolworths, Sorbet Dry Bar, Café Bagaso and Tosca.”

With 240 tenants collective action may not be that easy. Nozipho Khumalo, the National Marketing Manager for Mowana Properties which manages Tyger Valley, says they have been working tirelessly on various initiatives in a bid to ensure that continuity of business is achieved. “We have identified and met with the large water users within the mall including anchor tenants. Some of the tenants have implemented their own initiatives such as dry water washing at the hairdressers and the usage of disposable towels.” She says it has been imperative to ensure that the centre’s sprinkler system is not compromised and adds that Mowana Properties is also implementing other initiatives such as rainwater harvesting in preparation for future rainfall.

Blom notes that tenants have generally responded both positively and creatively to the crisis, sharing best practices with one another. In a further move the centre has appointed a water expert to assist the centre with scientific water-saving methods for the future.

Across the road from Tyger Valley, Willowbridge Shopping Centre with 82 tenants has a borehole but is mindful of restrictions on its usage imposed by the City Council of Cape Town, especially as regards garden watering. Lizelle Louw, Marketing Manager, says that the irrigation system was shut down as early as 2016. “Our landscaping team collects water from our aircon unit overflow pipes to water our flowerbeds at entrances only,” says Louw. “Fortunately, our landscapers had the vision to plant mainly indigenous plants that can withstand the drought.”

When asked how the centre had communicated with tenants regarding the urgent necessity of saving water she says that management has been very proactive. “Our first water-saving initiatives and campaigns launched in January 2017. Several strategies were implemented in January 2017 to reduce our water consumption in-centre. This was also shared across our social media platforms and via in-centre communication platforms. We also sent communiqués regarding our water saving initiatives to our tenants via email and these were addressed at our quarterly tenant meetings.”

The response from the tenants has been very positive, comments Louw who outlines some examples of tenant water-saving strategies:

Louw says the smaller fountains in the centre were all disconnected in early 2017. One of the fountains was converted into a sandpit for children and for the centre’s Easter marketing campaign children had to search for Easter eggs that were hidden in the sandpit. “This was one of our most successful events over the past few years,“ she comments. The central fountains were completely removed, and this has now created enough space to host exhibitions in the centre, with the area turned into a display for a BMW South Africa launch in December 2017.

Waste management at centres needs to be carefully managed for obvious reasons. Louw says hosepipes have been replaced with buckets and all bins are washed by hand with buckets of water which is recycled. The centre has requested that tenants use bin liners to limit the number of dirty bins which in turn reduces the amount of water used to wash the bins. A water filtration and purification system will shortly be installed at Willowbridge, which will utilise the Centre’s borehole water to supplement the main water feed from the City of Cape Town.

At the other end of the city Janine Davidson of Longbeach Mall in Noordhoek says the mall’s 87 tenants are naturally very concerned about the situation and are co-operating well with all centre initiatives. “We have sunk a borehole and hope that tests will confirm that the water is potable and can be used around the mall, “ says Davidson. “Our building manager arranged portable water tanks on wheels which we use in emergency situations and made use of while we waited to have the borehole up and running.”

She adds that the mall has been using a 10,000 litre harvested rainwater tank over the past six months for all cleaning and waste management purposes. “We have also installed a tank to harvest backwash water from the cooling towers which is then used to clean air-conditioning filters with a pressure washer. If Day Zero happens, we immediately go over to borehole water and we have installed 5 x 10,000 litre tanks which will be used as backup. Longbeach Mall is ready,” she says.

Table Bay Mall is a huge new development on Cape Town’s West Coast Road. Janine Coleske, Portfolio Manager for Zenprop, says that as part of their development planning they provided for water augmentation initiatives to assist in the event of diminished water supply by the City, and this has provided the Mall with a level of self-sufficiency. But, the mall has also implemented additional water-saving initiatives. These are the initiatives currently in place at Table Bay Mall:

Coleske says that with regard to potable water Table Bay Mall is investigating the installation of a further filtration system that would enable the borehole water to be drinkable and have started the council approval process. “The current daily average consumption for the mall from opening day in September 2017 to date is 157, 000 I/day. In addition to the water augmentation measures it is vital that all of us substantially reduce our water consumption. We urge our tenants to actively monitor their own staff’s water usage and where possible reduce daily consumption to the levels requested by the City to defer or hopefully avoid Day Zero, “ Coleske emphasises. “Tenants that are reliant on water for their operation will be urged to investigate alternative solutions and to present their proposed solutions for integration into the overall mall water management plan.” Hyprop has instituted stringent measures at all its shopping centres in the affected areas. The Hyprop centres are Canal Walk Shopping Centre, Cape Gate and Somerset Mall. To encourage the required behavioural change to avoid Day Zero when the taps will be turned off, the centres will make the City of Cape Town’s water dashboard visible on its TV screens – where applicable. The dashboard is a live, real-time reminder of when the city will run out of water.

Prior to the institution of even further stringent water restrictions, the company say it has proactively engaged with each of the affectedcentres to prepare for long-term water scarcity measures. This will ensure each of the centres will remain operational and compliant with health, safety and fire regulations. Hyprop’s Western Cape centres have committed a R19 million CAPEX budget to implement these long-term solutions to safeguard against future water stress:

As the premier tourist destination in South Africa, it is imperative that the V&A Waterfront is able to continue to operate at acceptable levels, says Stephan Le Roux, Growthpoint’s Divisional Director - Retail Portfolio. To this end, Growthpoint has commissioned a dedicated desalination plant for the precinct which will ensure future water security once it comes on line.

A visit to the V&A’s toilets shows no visible change in cleanliness standards – signage indicates that grey water is being used to flush and plentiful hand sanitiser is available in the soap dispensers. With these just some of the extensive, standard water-saving measures which Growthpoint has instituted across the property, it is clear there is a serious commitment to managing water responsibly and strategically. Le Roux says that the City’s reducing of water pressure (“throttling”) for example, meant that additional water tanks with booster pumps had to be installed to ensure centre sprinklers would be effective in the event of a fire.

“Our shopping centres have to trade,” he says, “Not only because thousands of people depend on the income and salaries but also because the public will continue to need daily access to stores.”

South Africa is no stranger to droughts and with rain figures becoming increasingly erratic across parts of the the country, Cushman & Wakefield Excellerate took the decision some years ago to take a hard look at how it could save water across its portfolio. And as a start, they looked at exactly how much was being consumed. Preston Gaddy of JHI Retail, part of Cushman & Wakefield Excellerate, says this approach has been instrumental in slashing Sandton City’s water usage by 16% since 2015. “A daily water check has become central to the centre’s operations, so that management is able to gauge current water consumption and compare this to established pattern, “ he says. “This helps to ascertain whether water use has increased beyond the normal range. With this in mind, water meters have been attached to each water pipe in the mall. “ To ensure that leaks are detected before they become a significant problem, Sandton City installed an alarm on its fire water system. This creates an alert when water is flowing, so that leaks might be stopped immediately. Cape Town’s malls appear to be doing all they can to embrace a paradigm shift in their usage and recovery of water. Day Zero or no Day Zero, many of their initiatives are likely to be of long-term value to their bottom line, to the shopping centre industry in general and to the environment.