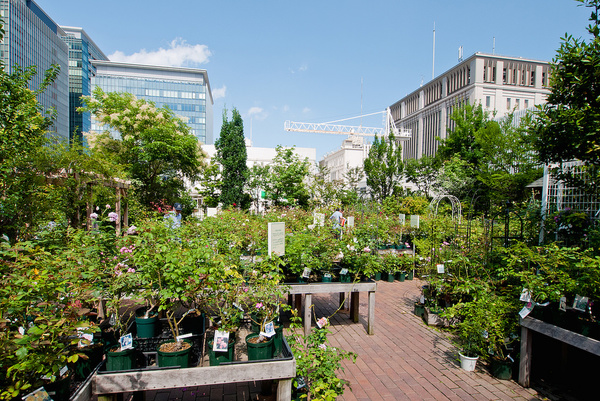 Rooftop gardens in urban settings are not a 20th century phenomenon. Indeed, they have been around since ancient times, with the earliest recorded ones dating back to the ziggurats of ancient Mesopotamia, built between 4,000 and 600 BCE. The Hanging Gardens of Babylon – one of the Seven Wonders of the Ancient World – is probably the most iconic example.

Skipping a few centuries to the Renaissance in Europe, Pope Pius had a palace built for himself in the town of his birth, Pienza, in 1463. The formal garden was built for him to hold audiences in. The palace (together with its roof garden) is now a UNESCO World Heritage Site, and has remained immaculately preserved since the 15th century.

In more modern times, roof gardens in cities have been built for many reasons – often as gathering places and social hubs. This was certainly the case in 19th century New York, when open-air spaces were often developed as an alternative to indoor venues such as theatres, which were too hot for use in the summer months (air-conditioning had yet to be invented). The Casino Theater in Manhattan was a popular venue – not only because it was the first to be electrified when it opened in 1882, but because of its roof garden theatre. Its popularity sparked a craze in New York, with a number of other venues developing open-air theatre and entertainment spaces.

In fact, the competition to build the most attractive open-air venue in New York in the late 19th century was pretty fierce. It was the origin of Madison Square Garden (still known as ‘The Garden’ today) – a venue the size of the entire city block located on the corner of East 26th Street and Madison Avenue (the venue has been through three subsequent reinventions, and the current Madison Square Garden is to be found in Midtown Manhattan between 7th and 8th Avenues from 31st to 33rd Streets, above Pennsylvania Station). The original Madison Square Garden was large enough to accommodate 4,000 people.

Next came Paradise Roof Garden, with its village design including a windmill, pond, waterfall, two cows, and a milkmaid. Hotel Astor outdid them (but not for long) with approximately 1,800m² of roof garden space that included a 300m-long tree-lined promenade. The New York Times reported on the Astor in 1920, saying that “a unique feature of the restaurant is the gabled-glass roof over which flows a miniature Niagara.” Not to be left behind, the Rockefeller Center started its own roof gardens project in 1933 – although it had to be scaled down from the original vision. Nevertheless, gardens were created on four of the buildings in the complex, and were quite spectacular.

The roof garden trend soon expanded, with roof gardens and roof spaces of one sort or another popping up everywhere – from the penthouse apartments of the wealthy to public libraries.

Kensington Roof Garden, London Department stores – the ultimate example of big retail in cities at around this time – also began to explore the idea of creating roof gardens for their patrons to visit. Kensington Roof Garden, London’s oldest and best known roof garden, was in fact inspired by the gardens atop the Rockefeller Center. The garden was built on top of Derry and Toms Department Store, and is still known to many today as ‘Derry and Toms Roof Garden’. Commissioned by Barkers, the company which bought out the department store in 1938, the garden has been a feature of the building and an important part of central Kensington ever since. Barkers redeveloped the original Derry & Toms building, and wanted a seven-floor building, but was restricted to six floors by the London Fire Brigade, whose ladders couldn’t reach that high. The vice-president of Barkers, Trevor Bowen, commissioned the architect, Bernard George, to design a rooftop space which could accommodate a tea and lunch restaurant and a garden.

When the new department store opened in 1933 the garden had not yet been built, but Bowen was aware of the project at the Rockefeller Center and decided to make a trip to New York to see it first-hand. He was very taken with the Gardens of the Nations on the 11th floor of the RCA building – a design by Welsh-born landscape architect Ralph Hancock. Bowen returned to London wanting to create something similar at Derry and Toms, and convinced Hancock to return to Britain to create the world’s largest roof garden in Kensington.

The garden, which Hancock began work on in 1935, covers 1.5 acres (roughly 6,000m2) and is 30m above street level. It has ponds, bridges, walks, trees, shrubs and sitting areas, and is designed in the Arts and Crafts style. There is an English Woodland Garden with nearly 100 species of tree, a Spanish Garden with fountains and Walled Tudor Garden. The gardens were finally opened in 1938 and became a huge tourist attraction.

The roof gardens thrived over the next 35 years. Derry and Toms’ customers would walk there or have tea in the pavilion, and many charity events were held at the venue during World War II. From 1957 onwards, the property changed hands numerous times, with the restaurant being reinvented along with it. Finally, Virgin Group took over the lease on the roof garden in 1981, turning the old restaurant building into a night club and renting out the garden for weddings and other events. Virgin operated the gardens until just recently, when it announced that in the face of unpredictable market conditions the garden’s doors would close.

Mitsukoshi Department Store, Tokyo On the other side of the world, the Japanese department store Mitsukoshi also got in on the roof garden trend. Mitsukoshi is a brand with an extremely long history in Japan, dating back to 1673 when Takatoshi Mitsui, a kimono fabric merchant, started a business selling fabric at labelled prices – an entirely new concept in Japan at the time. The business gradually evolved into the department store that Japanese came to know as Mitsukoshi, and by the 1914, the store occupied a prime site in the Nihonbashi district of Tokyo.

It was rebuilt in 1926 as a flagship for Mitsukoshi (which by that stage was opening other stores, too), offering 61 different departments for customers to shop in over five floors, and – of course – a roof garden. With a frontage of about 36.5m and a depth of almost 56m, the garden was the cherry on top of this star attraction. It featured a conservatory filled with Japanese blossoms, together with American roses and carnations. It had a goldfish pond with a sparkling fountain, extensive flower beds, and a wisteria arbour in one corner, from which one could take in beautiful views of Tokyo, and see all the way to Mount Fuji. In an interesting mix of cultures, it also offered an American-style soda fountain which did a roaring trade in ice-cream, as well as a small Shinto shrine in the style of Japanese wayside shrines.

Today, although the flagship Mitsukoshi store is now located in the upmarket district of Ginza (this store also has its own fabulous roof garden), the Nihonbashi store still retains its essential Japanese character. The roof garden is still there, too – albeit in different form. It now forms the department store’s garden centre, complete with a pet section. It continues to attract both locals and travellers.

A modern take on roof gardens

Nestled on the roof of the department store, more than 18,000 plants exist in a carefully designed garden, far above the hustle and bustle of the boulevards. This is no decorative garden, however – it is a working kitchen garden which produces fresh fruit and vegetables for the store’s restaurant all year round. For a fee, the gardener will take visitors on a tour, letting them sample the fruit and vegetables.

The garden is maintained by the store in partnership with Sous les Fraises (meaning ‘Under the Strawberries’), a pioneering start-up specialising in organic food production in urban areas. Stemming from the ongoing collaborative research between agronomists, chefs, architects, urban planners, and city-dwellers, Sous Les Fraises puts in place biotechnologies adapted to the built environment. The organisation strives for water and waste management with the aim of food production for the city.

Sous les Fraises produces as close to the consumer as possible. This is important in order to guarantee a fresh harvest of organic, clean produce packed with flavour and with the highest nutritional value achievable. The organisation also collaborates with governments and private companies to green up the cities and contribute to a richer, more productive, and healthier environment.

It designed the rooftop of Galeries Lafayette Haussmann with a green roof that houses more than 150 varieties of edible plants. In a space of just over than 1,200m² there grows a wide variety of plants including strawberries, raspberries, edible flowers, aromatic plants, cabbage, and more. A vertical planting system makes the most of the available space, creating its own ecosystem on the roof of the department store.

Beaugrenelle Paris takes the environment seriously Beaugrenelle Paris, one of the largest shopping centres in the inner city, has taken a different, but equally important, approach. Rather than creating a roof garden, in 2013 the shopping centre completed a 7,000m2 green roof – the size of a football stadium. A green roof is distinct from a roof garden in the sense that it is not designed to be used for recreation so much as it is a living roof – an integral part of the building itself, designed and engineered as such.

Beaugrenelle’s green roof, which sits 30m above the ground, is designed to do what most living roofs do: have an environmentally beneficial function. This is something which is increasingly important in cities which have a tendency to become heat islands. Green roofs are able to mitigate heat generation from buildings (absorbing rather than reflecting sunlight), reduce rain water runoff, and provide effective heat and noise insulation inside buildings themselves. In a world in which urban sprawl has increasingly encroached on nature, often threatening ecosystems, green roofs can also play a role as havens for biodiversity, being home to wild grasses, flowers, birds and insects.

The green roof at Beaugrenelle Paris is a veritable rooftop meadow, with wild flowers like bellflowers and foxgloves, together with wild grasses and other vegetation, growing in a 40cm layer of soil on the engineered roof, which is naturally irrigated by rain water. Nesting boxes and hives have been installed to attract wild birds and bees respectively.

Green roofs are gaining increasing attention as people become more aware of the benefits they have to urban assets, and to the environment as a whole. In 2012, more than a million square metres of plant-covered roofing was built in France alone, putting it together with Germany at the forefront of the movement in Europe. Although they require maintenance and proper care, green roofs are on the increase, which is encouraging – and examples which the public can clearly see and experience, like Beaugrenelle, make all the difference to their public acceptance.