The sky’s the limit… for now 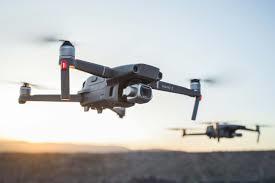 Drone technology has made considerable advances and can be a powerful tool for many sectors of the economy. These unmanned aerial marvels have sparked the creativity of people and industries around the globe, and we have only just begun to scratch the surface of their potential applications in this new digital world.

These new technologies can assist brick and mortar stores in trimming the fat and increase efficiency, helping their physical stores compete more effectively with e-commerce. A US-based company has designed what could be a major disruptor for inventory control - an in-store drone that scans shelves to give retailers real-time inventory data.

This new drone is an aerial robot, with a small camera that acts as a set of ‘roving eyes’. The drone is low cost, very agile, and can be deployed simply. It can literally move within a few seconds to any aisle or portion of the store. It operates away from people by moving into areas which are empty and it fades away to another aisle if someone enters.

At the same time, as the drone moves through the air and peers at the shelves, it is able to see the items on the shelf from many angles and perspectives — as if there were up to 100 fixed cameras focused on every item on every shelf. This guarantees more accurate recognition of barcodes over a fixed camera system or even ground-based rolling robots. The drone itself is neither processing the scene nor computing the image recognition or AI. The interpretation of data happens within the store’s network and in the cloud.

It also learns how the shelf is organised by looking at how it changes over time, and how and where products are replenished. From that, it can automatically detect and alert for what is out of stock, running low, is misplaced, and even products facing the wrong way.

This form of autonomous perception can be quite important over a wide range of other applications, such as the condition of products on the shelf, floor spills, temperature or equipment problems, freezer doors left open, and over-ripe produce.

From the air, drones can see almost anywhere, see from many perspectives and vantage points, and can be dynamically redirected to different aisles and situations within the store. While fixed cameras and smart shelves can be effective for certain applications, they come with a potentially higher per-store capital expenditure. These drones offer retailers better technology, and at less than 1/100 of the cost of other approaches. It can also be set up in less than two hours, is highly accurate and ultimately, promises to be more efficient.

Security robots, or drones, are also highly applicable in shopping malls and centres. Designed to replace CCTV, these robots are already being used to patrol shopping malls and parking lots, offering better visibility and functionality than fixed camera systems.

DHL meanwhile has launched what they say is the world’s first regular, fully automated and intelligent urban drone delivery service in China. For the moment, the regular deliveries are limited to an 8km route between a DHL service centre and the specified delivery address. According to DHL, this new delivery service reduces one-way delivery time from 40 minutes to only eight minutes and can save costs of up to 80% per delivery, with reduced energy consumption and carbon footprint compared with road transportation.

To make deliveries of prepared meals in dense urban environments, Uber is also experimenting with drones for Uber Eats, and the company has recently finished the first stage of testing in conjunction with McDonald’s at San Diego State University.

The goal is to expand Uber Eats drone delivery, but for now Uber is using drones for just a portion of the delivery process: Restaurants prepare the food before putting it onto a drone that flies to a drop-off spot determined ahead of time. Uber’s Elevate Cloud Systems guides and monitors the drone in addition to telling a delivery driver from Eats where and when to pick the meal up. In the future, Uber reportedly sees landing the drones on top of Uber vehicles that are parked near delivery locations.

Years after they first mentioned the concept, Amazon is also working to have drone deliveries up and running soon. Since Amazon first announced its plan for a drone delivery service, the company has gone through more than two dozen drone designs, none of which was able to adequately avoid other aircraft, objects, or people on the ground. The latest version of Amazon’s Prime Air delivery drone is apparently safer, more efficient, and more stable than previous models.

Drone deliveries, however, may still be a dream of the far future in South Africa as we face some of the strictest drone regulations in the world.

In South African law, (Remotely Piloted Aircraft Systems) RPAS are governed by the Civil Aviation Regulations, Part 101, which came into effect over three years ago, in July 2015.

For commercial, corporate and non-profit RPAS operators to comply with Part 101 and operate RPAS legally, they need to obtain an RPAS letter of approval from the Director of the South African Civil Aviation Authority (CAA), apply for a certificate of registration for each individual RPAS, apply for an RPAS operating certificate, and submit a maintenance programme for approval by the Director of the CAA. Over and above this, the actual RPAS are required to be operated by qualified and licensed pilots who have completed the necessary training from a training facility approved by the CAA.

Once you have your RPAS operating certificate, you must be insured for third party liability – which is legislated at a minimum of R500,000 per RPAS.

Not shy of a challenge, South African National Blood Services (SANBS) are working on a plan to deliver emergency blood to hospitals by a drone, saving lives by delivering emergency blood to hospitals as far away as 100km away from the blood banks. The drone will fly at an altitude of 100m in the air without having to navigate traffic and will be able to carry the equivalent of four units of blood. Though it will be a while before a drone like this will be licensed to fly in South Africa, the CAA has advised that they will have to adhere to aviation laws surrounding the transportation of blood which is classified as dangerous goods.